Israel and Palestinian Islamic Jihad have agreed to a ceasefire following a weekend of fighting.

Israel thanked Egypt for its “efforts” in helping to broker the truce.

It added, however: “If the ceasefire is violated, the State of Israel maintains the right to respond strongly.

“We will not allow any disruption to the lives of the citizens of the State of Israel.”

Ziyad al-Nakhala, secretary general of Islamic Jihad, said: “If the occupation does not abide by what was agreed upon, we will consider the agreement null and we will resume the round of fighting without hesitation.”

Islamic Jihad also said the truce would involve the release of one of its leaders, Bassam al-Saadi. Israeli officials did not immediately comment.

It has been the most serious flare-up on the Gaza frontier in more than a year.

In an update on Sunday evening, the Palestinian Ministry of Health said the number of Palestinians killed had risen to 44, including 15 children and four women.

More than 350 people had been injured, the ministry added.

They described their attacks as pre-emptive strikes – against an anticipated Islamic Jihad attack designed to avenge the arrest of Mr al-Saadi in the occupied West Bank.

In response, Islamic Jihad fired hundreds of rockets at Israel, threatening much of the south of the country.

Residents of cities including Tel Aviv and Ashkelon descended into shelters. 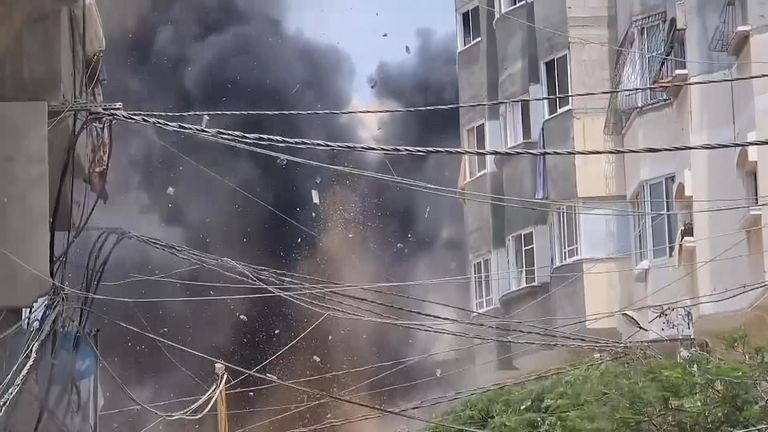 
A senior member of the Palestinian Islamic Jihad (PIJ) has died as a result of Israeli airstrikes, officials have said

It emerged earlier that a second senior Islamic Jihad commander – Khaled Mansour, the group’s top official for the southern Gaza Strip – had been killed.

A strike in the southern city of Rafah also killed two fellow militants and five other civilians, including a child and three women, the group said.

On Sunday, Islamic Jihad extended its range to fire toward Jerusalem in what it described as retaliation for the killing of Khaled Mansour.

Israel said the rockets were shot down just west of the city by its Iron Dome interceptor.