The pastor and miss Happiness Nwakanma were said to have kicked off a relationship, which eventually led to marriage in the same month of May, despite the fact that her parents were against the sudden and drastic marriage.

Things were said to have turned sour in the marriage after the bride who is a student of Federal Polytechnic, Nekede, in Imo State requested her husband’s permission to complete her HND programme and he blatantly refused.

It was revealed that the initial agreement the prophet had with the lady’s parents was that he would support her education, but rather he posed as a stumbling block.

The lady who shared the post in a Facebook group further alleged that the prophet hypnotised her all through the years of their marriage as she continued to have nightmares and countless spiritual attacks.

Reacting to this claim which seems to have gone viral, the Pastor surfaced to give a stern warning to people who accuse the ‘lord’s anointed’ falsely.

“My spiritual advice to many who has not experience the anger from the alter, never lay false aligations against men of God just to destroy who is untouchable. That is a sin against the holy Spirit which even God says it can’t be forgiven.

“Person like me I won’t forgive I will hurt that family spiritually until everything there dry up, u can insult me I will forgive but say anything that is not true against the church, everyone who is in support of it will will be drawn according to the scripture, is a covenant that the church is built on a rock that gate of hell shall not prevail whoever who touch the church the rock falls on the family, ( u can fight fakes prophets and go free but men of God who has never sold their soul to Satan will not forgive whoever that discouraged them.

“IAM an example I will never forgive until I see the end of that family, I swear with my life (Is just an advice to many born by Satan to destroy churches and ministers Grace are difference some are born with dangerous anointing that God does not like to see them share tears) much love from here.” 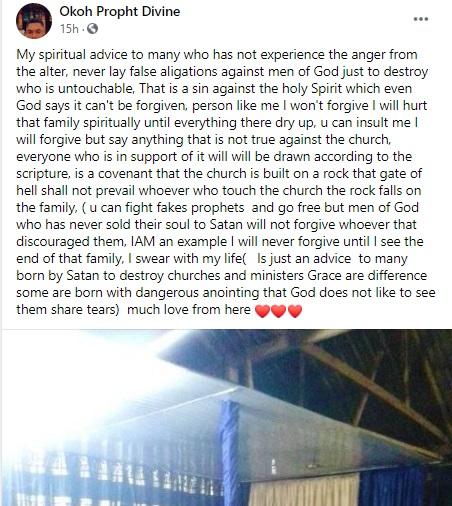