The Concerned Nigerian Group has petitioned the Economic and Financial Crime Commission(EFCC) seeking for the probe of the Lagos Landlord, Bola Ahmed Tinubu on allegations that some bullion van were cited at his Lagos residence during the last general election.

In a Letter titled, ‘LAGOS ANTI-CORRUPTION LAW- GO AFTER TINUBU NOW” dated May 4, 2021and signed by it covener, Deji Adeyanju, he urges the commission to go after the national leader of the All Progressive Congress.

The letter reads in part, ‘We write in view of recent development by Lagos State Government to establish an anti-corruption commission. As you must be aware, this move is not to ensure accountability and transparency in the state civil service but to permanently and tactically shield the Lagos Landlord, Bola Ahmed Tinubu from prosecution. The position of the law and several judicial interpretations on the subject matter is clear. The Commission can investigate anyone for corrupt practices in the country. We, therefore, urge you to be courageous and go Bola Ahmed Tinubu.”

“Nigerians generally do not take EFCC serious any longer because of the perceived one-sided anti-corruption fight. Going after Tinubu will show that things are now different under you. Find attached our bullion vans petition against Mr. Tinubu dated 25th October, 2019 for your kind consideration. We are aware of several other corruption allegations and petitions against the former Lagos State governor and his successors which were never investigated.” 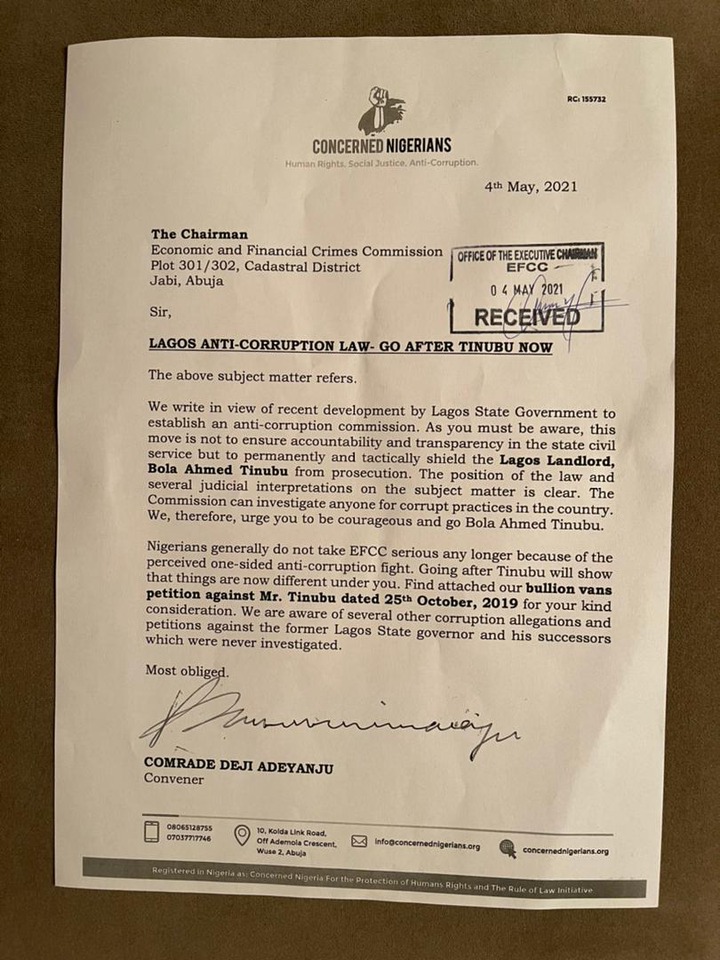